The Oswegatchie Hills Nature Preserve in East Lyme, Connecticut, overlooks the environmentally fragile Niantic River to the east, and was officially opened in 2007. The 457-acre preserve was created through a public/private partnership. The ultimate goal is to expand to more than 700 acres, through additional acquisitions.

​Take a self-guided hike of Oswegatchie Hills Nature Preserve or if you would like a guided hike led by a member of FOHNP, e-mail us at info@oswhills.org. ​We'll share the latest on efforts to protect the remaining acres of fragile coastal forest that help protect the Niantic River estuary between East Lyme and Waterford.

We invite you to browse this website to learn more about The Oswegatchie Hills Nature Preserve, print a Trail Guide, read the environmental studies that have been performed in The Hills, learn about the history of the preserve and view our photo gallery of the beauty to be found in The Hills. We welcome you to learn how you can become involved in helping The Friends maintain this special corner of the world, and become a member or make a gift.​

Press Release from 10-26-21 East Lyme, CT - In long-awaited victory for conservation of East Lyme’s Oswegatchie Hills and the Niantic River, a judge has ruled in favor of three organizations seeking to protect 236 acres of coastal forest threatened with destructive development. The court rejected the developer’s challenge to the preliminary decision, sending the decision back to the local zoning commission.

“This is the fourth Judge over 17 years to recognize the substantial environmental interests in preserving the Oswegatchie Hills and the Niantic River and to uphold the Commission’s obligations to thoroughly consider and protect these interests before allowing ultra-dense development that could destroy them forever,” said Roger Reynolds, senior legal counsel at Save the Sound. “The applicant will finally have to disclose their detailed plans and we look forward to presenting in-depth, science-based information about the devastating and irreversible impacts that this 840-unit monstrosity would have on wetlands, coastal forest, and the Niantic River.”

Landmark Development Group LLC had appealed East Lyme Zoning Commission’s 2015 conditional approval of the developer’s preliminary site plan, claiming that the commission acted illegally by refusing to rezone a vast swath of the Hills for high-density development. Save the Sound (previously Connecticut Fund for the Environment), Friends of the Oswegatchie Hills Nature Preserve, and Save the River-Save the Hills intervened to protect the public trust in the Oswegatchie Hills and Niantic River. At that hearing the intervenors provided evidence that stormwater from the development would unreasonably pollute wetlands and the Niantic River and that the developer had failed to disclose that one of the buildings would actually be located directly on a wetland. The developer did not seek to rebut or contest any of this evidence at the hearing.

On June 30, 2021, Save the Sound’s attorneys presented oral argument before Hartford's Connecticut Superior Court/Land Use Court, contending that the court should reject the developer’s appeal because the developer had thus far failed to address any of the substantial environmental impacts raised at the hearing and in the previous decisions.

Late Friday night, the court released the decision in which Judge Marshall K. Berger declared that the court will deny the developer’s appeal to overturn the preliminary decision and stay the matter pending action by the commission. The developer was ordered to supply the necessary environmental and other information for the commission to adequately consider the final site plan and rezoning.

“Obviously the Friends of Oswegatchie Hills is thrilled by Judge Berger’s decision,” said Kris Lambert, president of Friends of the Oswegatchie Hills Nature Preserve. “It has been a long five years to get to this point and an even longer 20 years that we have been in the fight to protect the fragile environment of the Hills and the Niantic River. This ruling now requires Landmark to provide complete information so that the Zoning Commission has the facts it needs to make a decision about a final site plan, if and when submitted. The Friends continue to think that absolutely no development on the 236 acres is best for the environment of both the Hills and the River. In the end it is still our goal to acquire and permanently protect the last bit of undeveloped land on the Niantic River.”

Fred Grimsey, founder and president of Save the River-Save the Hills, said, “We are gratified by Judge Berger’s decision and recognition that the final site plan, with necessary environmental information about the impact to wetlands and water quality, is needed to determine whether high-density development can be safely constructed in compliance with environmental laws. Our organization has always advocated that the best way to protect the River would be no development in the Hills.”

The Oswegatchie Hills are one of Connecticut’s most vulnerable parcels of open space. The Hills rise sharply from the Niantic River with a union of spectacular rock formations, rugged forest, wetlands, and vernal pools that provide a home for a multitude of native plant and animal species. The slopes carry shallow topsoil cover to the bedrock. Its coastal location provides a safe haven and refueling stop for migrating birds, and the hills protect the delicate ecosystem of the Niantic River, a tidal estuary that flows directly into Long Island Sound. The southern two-thirds of the forest is protected as the Oswegatchie Hills Nature Preserve, threaded with public trails that provide hiking and birdwatching.

The owner of the threatened parcel of 236 acres, Landmark Development, LLC, seeks to construct up to 840 units of housing, with 1,767 parking spaces and 36 acres of pavement and hard surfaces. Not only would the diversity of animal and plant life be harmed by this development, but stormwater runoff carrying pollutants from acres of impenetrable surfaces would threaten water quality. Nearly 30 local, regional, and state-wide organizations and hundreds of individual supporters have been working together for years, through the Save Oswegatchie Hills Coalition, to prevent destruction of this land and add it to the existing preserve.

Rain barrels made from repurposed 60 gallon olive drums, from the Great American Rain Barrel company were provided to 30 lucky Niantic River Watershed residents. It was an incredibly popular program, with over 55 folks signing up!
​This project was funded in part by CT DEEP ​through a
​Clean Water Act Section 319 NPS Program Grant 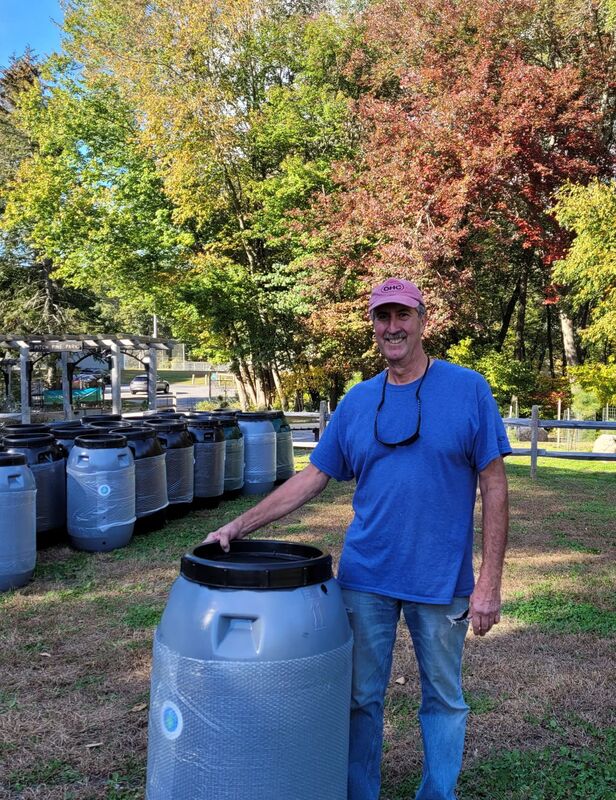 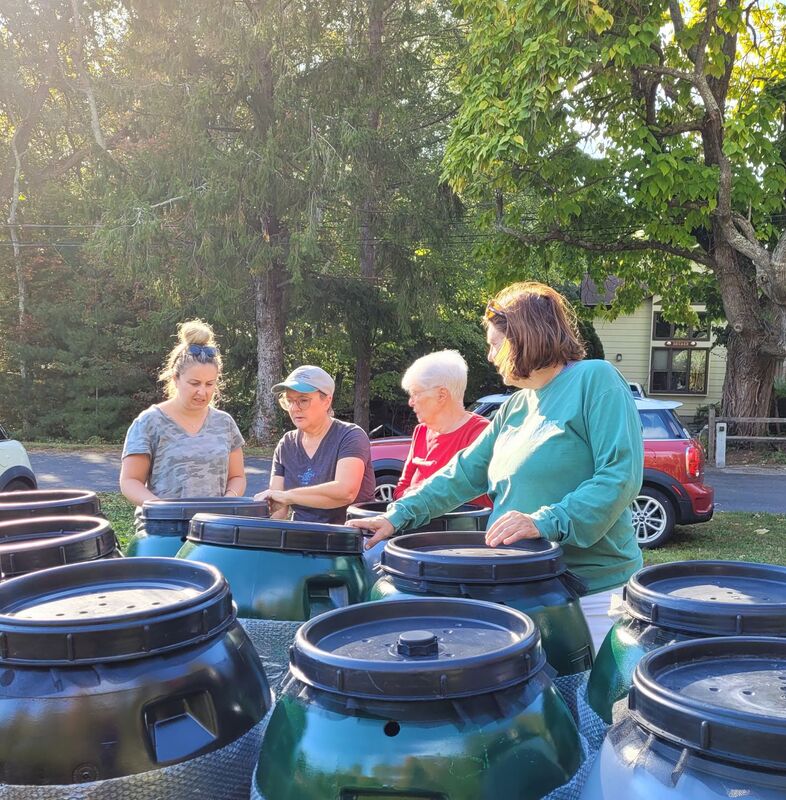 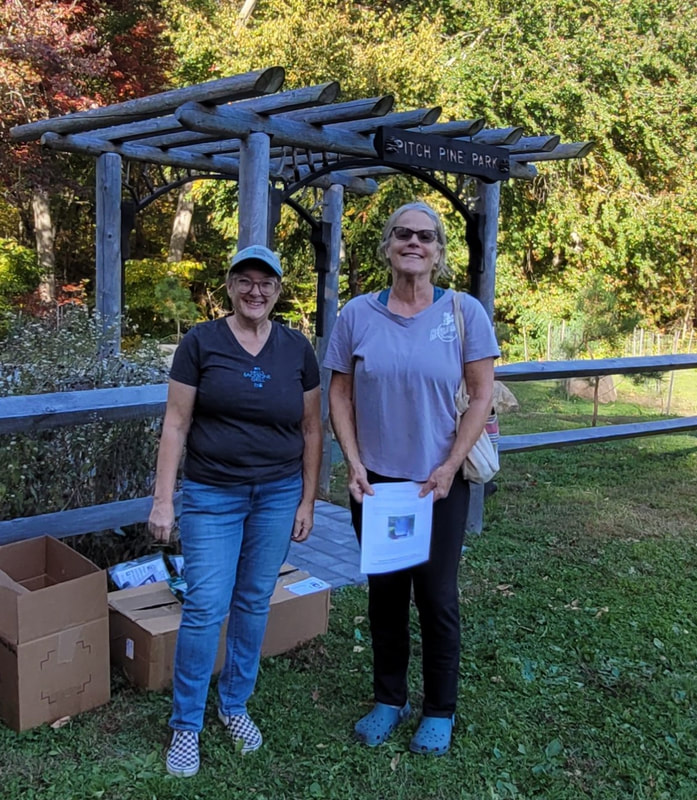 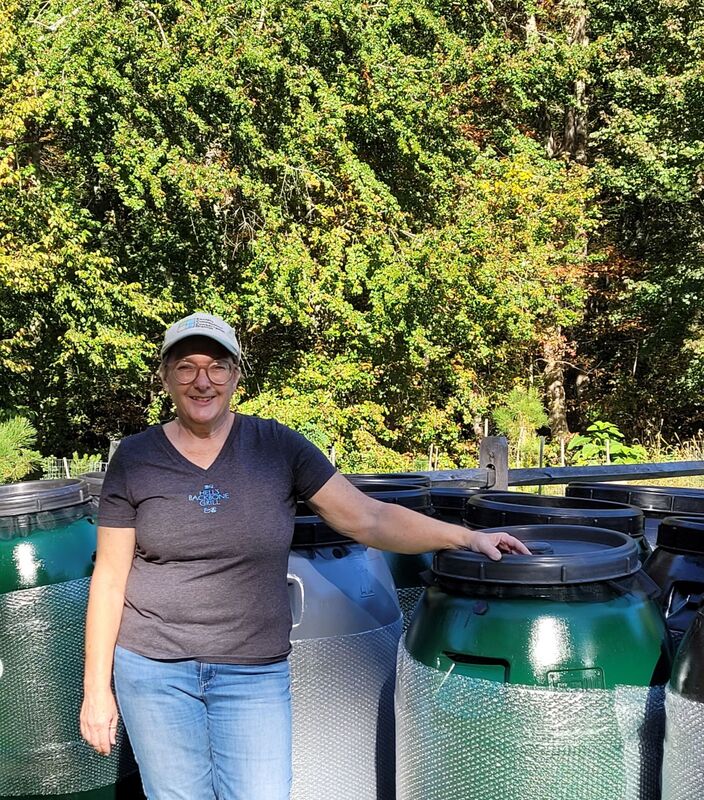 Friends of The Oswegatchie Hills Nature Preserve (FOHNP) is a non-profit volunteer organization, funded by private contributions, whose mission is to create, manage and improve The Oswegatchie Hills Nature Preserve. We are a 501.c.3 corporation and your donations are tax deductible. Management of the preserve is performed via conservation easements and a partnership agreement with The Town of East Lyme.  Learn more  about our organization​
​Lots of activity in the ﻿Current Newsletter﻿ - check it out to stay up to date!​
Learn more about the Conservation Efforts underway in the Hills including the Southern Pine Beetle Testing, FrogWatch Project, the Pitch Pine Park and Tree Nursery and the new Beech Tree Leaf Disease Study.
Support Us ~ Join our Membership

As part of the pitch pine conservation project, we received a donation of 50 pitch pine saplings, volunteers who helped to plant included Ray and Penny Heller, Paul and Barb Whitehouse, Franz Edson and Amy Gonsalves. In addition, Dave Hughes and Birds Unlimited donated and installed a chickadee house along the embankment. Come visit the Pitch Pine Park and Tree Nursery on your next visit to the Hills!

Seen in the Hills 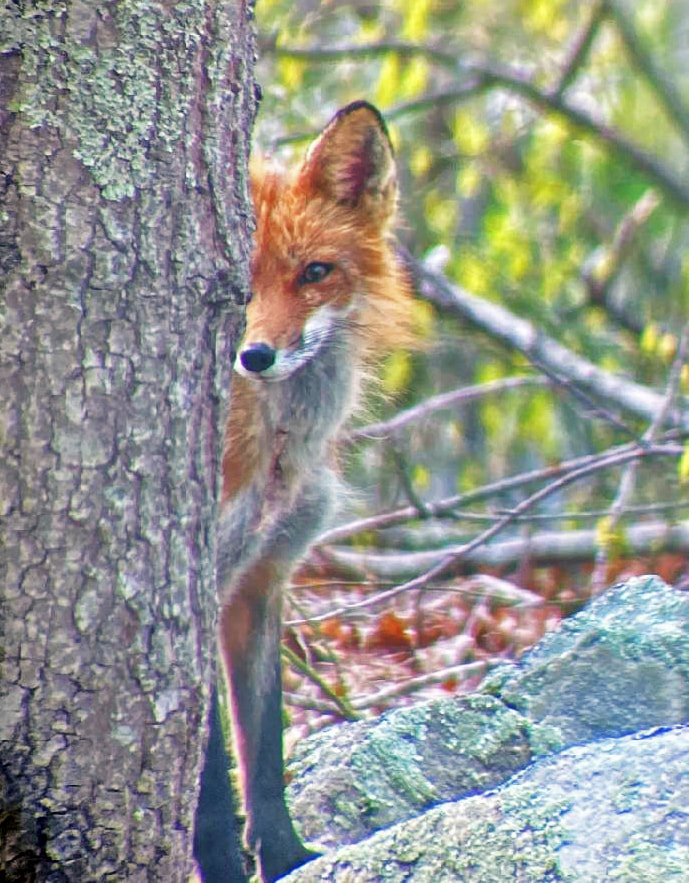 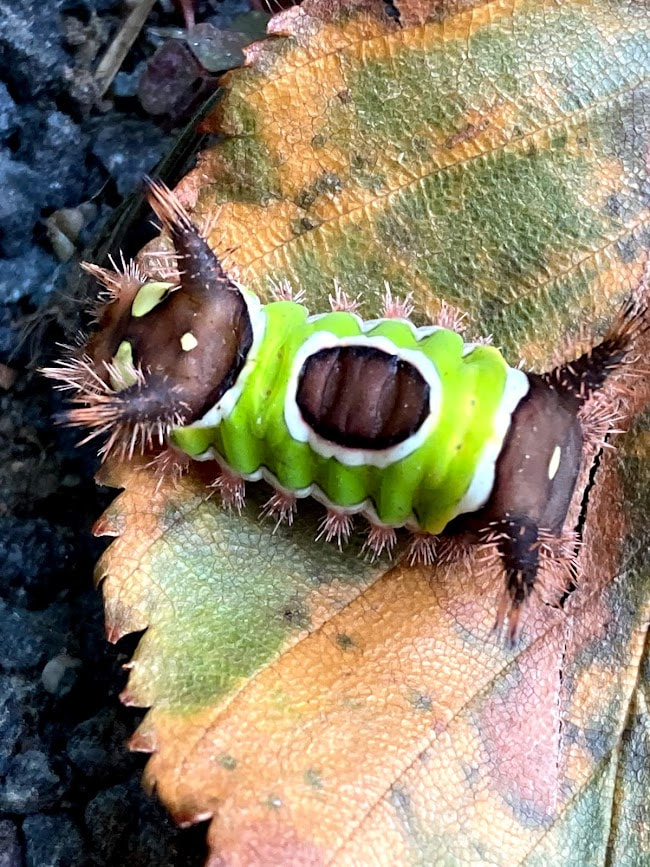 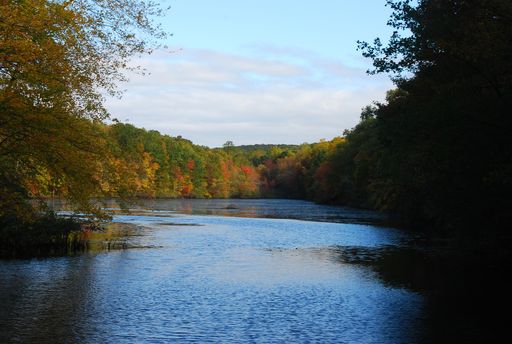 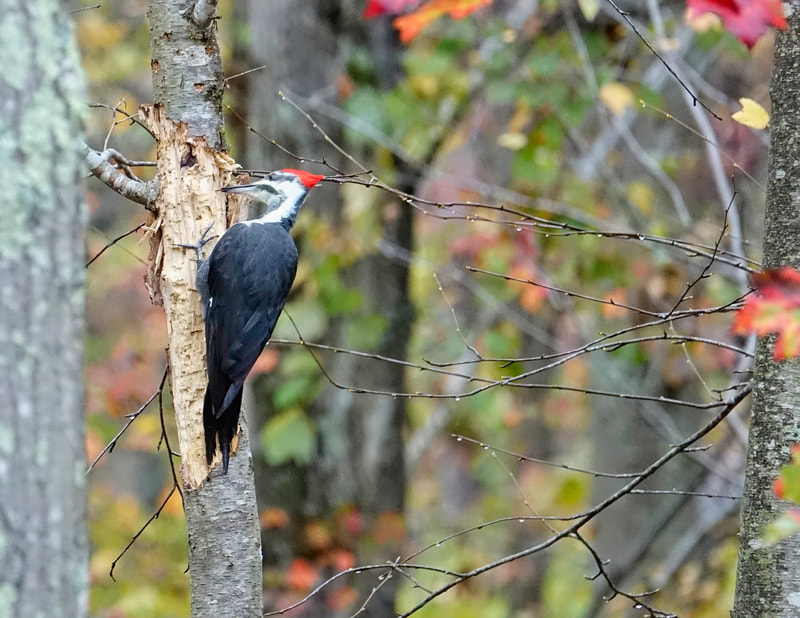 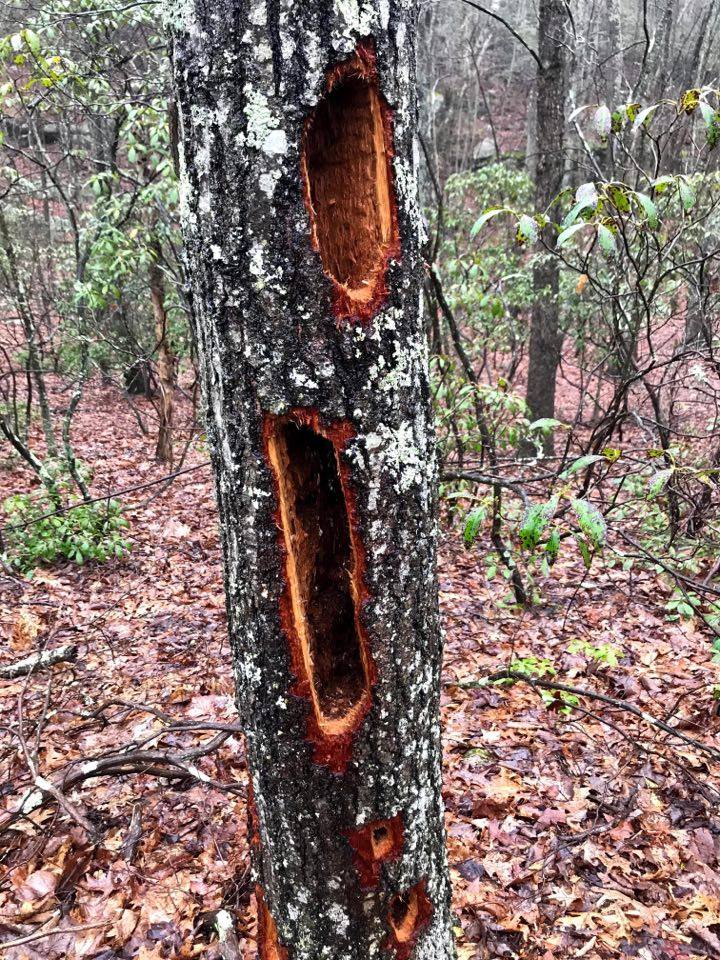 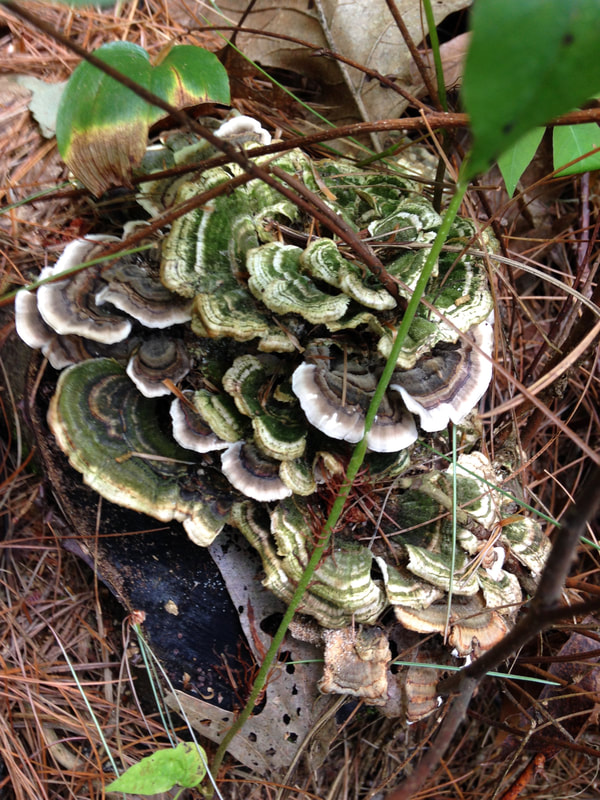 Now more than ever we need your help!  Join the coalition
With the pandemic upon us, now more than ever we realize how important preserving outdoor space is for our physical and mental health and we continue our efforts to prevent inappropriate over-development of the adjacent 236 acres. Acquiring that land, which includes a mile of river frontage, would expand the preserve, protect additional wetland and wildlife, while allowing more opportunities for experiencing the magic of the Hills.

We believe the best use of the remaining 236 acres of this vulnerable coastal forest is preservation, not high density housing. We want this land to be acquired at fair market value and added to the adjoining Oswegatchie Hills Nature Preserve.

Please show your support by joining our coalition. A broad range of civic leaders, residents, conservation, and environmental groups have already joined, and are advocating to preserve and protect the Oswegatchie Hills and the Niantic River.

Please sign our online petition and show your support
FOHNP is on Facebook
Check out our Facebook page at www.facebook.com/fohnp for updates on Preserve activities and opportunities.
We love to hear your feedback and see your photos!
© Friends of the Oswegatchie Nature Preserve, Inc., a 501(c)(3) corporation.
info@oswhills.org