Southern Pine Beetle Trapping Results for 2019
Southern pine beetle (SPB) trapping by the Connecticut Agricultural Experiment Station (CAES) continued this year at four sites in CT., one being the Oswegatchie Hills Nature Preserve. The monitoring is to determine whether the SPB is overwintering in CT or being killed by cold weather. Climate change has allowed the invasive pine beetle to continue to move further north into New England and eventually beyond into Canada.

Results show an overall increase in SPB numbers this year with numbers skyrocketing at a trap site in a pitch pine stand in Groton, causing concern by CAES that an infestation there may be underway.

If there is any good news in the data, it’s that the numbers of SPB in the Hills were low for the years 2018 & 2019 but the year over year trend increasing. The beetle was first discovered in CT in 2015. It’s is considered one of the most destructive insect pest of pine forests and has a sever negative impact for endangered species and recreational areas. 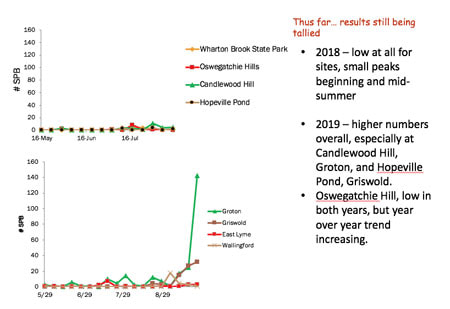